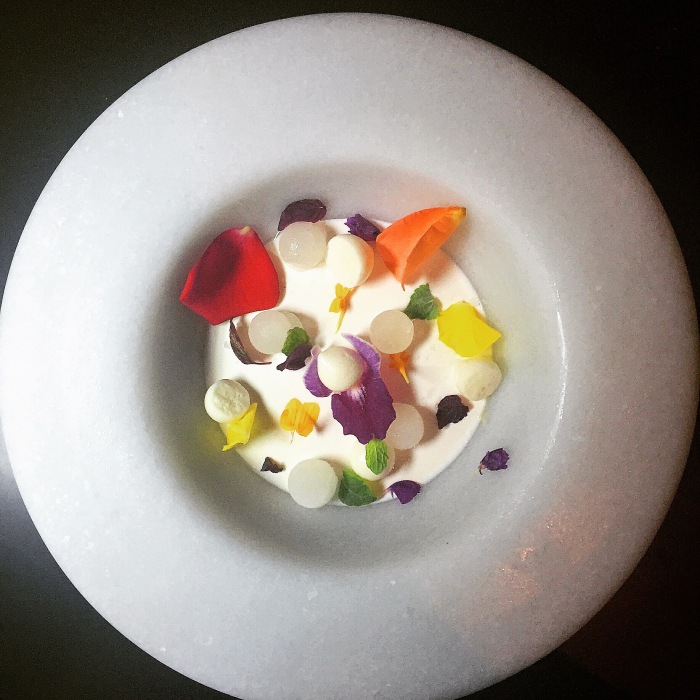 According to Dictionary.com, an Enigma is a puzzling or inexplicable occurrence or situation, a definition which basically sums up my experience at Dubai’s latest restaurant phenomenon. Part theater, part science project, part restaurant, Enigma prides itself on being mysterious, so much so that any request to see the menu comes with firm denial. Discretely tucked away in a corner of the elegant Palazzo Versace Hotel, Enigma is as seductive as is its concept, one that rotates high profile chefs, menu and theme every three months. Such a risqué concept could only debut with a chef as bold as the concept itself.

Culinary genius, 3 Michelin Star chef and brainchild behind Quique Dacosta Restaurant, currently ranked the 39th best restaurant in the world, Dacosta is just as avant-garde as Dubai is luxurious. He absolutely embodies the grandeur and progressive-thinking that Enigma stands for, an obvious choice for the restaurants opening act.  He is a chef who takes pride in thinking outside the box, a chef who tells a story every time he puts something on the plate, a chef who isn’t afraid to turn off the lights and send his waiters out into Enigma’s intimate dining room in minotaur masks to serve Breakfast at Tiffany’s, a glowing diamond shaped palate cleanser composed of lemon compote, meringue and crystalized apple.

Many refer to Dacosta as a chef with a botanist’s eye, an accurate assessment as his approach is certainly where botany and science collide. Just one bite of his multi-sensory Foggy Forest Floor will reveal just how much he integrates the wilderness into his menu. The theatrical dish takes you on a journey through the forest incorporating fog, plants and faux soil before revealing beef, truffles and wild mushrooms. A series of enigma’s followed, a bed of rocks doubled as parmesan stones, a single rose unraveled as an apple and my personal favorite, a dish of black rice with pigeon, called Rice with Ashes, unfolded as the story of burnt rice fields post-harvest in rural Spain.

The entire experience, albeit mysterious, was inspiring, creative and thought provoking, sentiments I rarely experience in conjunction. I had to know more and so I had a word with the charming and humble chef in an attempt to get inside his head and understand his approach to creating food. Here is what I found!

As for Enigma, Chef Quique’s 3-month run namely entitled “Vanguard” is on until April 12, I look forward to the second act however Dacosta will be a very tough act to follow. Get your tickets at www.EnigmaDXB.com.

Did you always know you wanted to be a chef? How did you get your start in the culinary world?

Working in the kitchen was not one of my dreams as a kid, but it captured and seduced me with tremendous energy. I have the feeling that it was the kitchen that chose me, not vice versa. Besides, my start in the kitchen was somewhat less than glamorous. My career in the kitchen started with washing pots and pans and taking out the trash. Those were my two first jobs, but in those simple places, I found the dedication and love for things well done.

I can see that being part of the vanguard is very important to you, what are you doing to ensure you are at the brink of the culinary world and that your cuisine is different?

With a new dish, my attitude is always evolutionary, innovative, always seeking inspiration from places, things, disciplines and people. Investigating and dialoguing with disciplines different from my own and building new harmonies, getting to know the world from what I learn about it. This attitude is what motivates us to do new things. We receive guests from all over the world, with the hope of having different experiences, and that also enables us to grow.

Where do you get your inspiration for creating dishes and plating?

Ideas are the engine for creating a dish. Without a main idea, the creation of a dish would not unfold in the kitchen. Based on that main idea, we are inspired by the product’s origin, the techniques we are going to apply, the possible convictions, the esthetic aspect of the plating, the dinnerware, the texture of every bite… Inspiration is in my search for a language, with the permanent intention to trigger new sensations in myself and in others. After a 27-year career, I think inspiration lies in how I feel, how I view and express everything that I am, which in turn, the way I see it, is the most authentic thing I can offer those who visit us.

It seems that your food and ingredients most often represent where you are from, so in the case of Vanguard at Enigma, where will you be sourcing ingredients from and what will be the theme of the menu?

I’m faithful to the principle of excellence, the fundamental pillar of my work. That´s why the product needs to be excellent, but without any restrictions on its origin, and besides, 95% of the products consumed in Dubai are imported. I also want to grow and investigate that percentage of native products. Fish, spices, meat. Searching and encountering the processes of the region in its tradition, as well as the techniques and inspiration they apply, so that my time here also serves to form part of next season at “Quique Dacosta Restaurante”. On the other hand, the only way to know the theme of the menu is living the experience at Enigma.

I’ve read that you describe your cuisine as it leaving a window open to the world, what do you mean by this?

Leaving a window open to the world enables me to continue to grow as a chef, exploring paths not taken and adding an aspect of plurality to our cuisine year after year. It would be very deficient to be in the UAE for three months, allowing myself to be seduced by its plurality and uniqueness, and not enrich my offering with everything eaten, seen, known, learned and sought out here. All of this adds up, and I believe that my diners are excited to experience my trips around the world in my dishes.

I can see that you are a modernist chef and very avant-garde, how would you describe your cooking style?

I don’t see myself type casted in a vanguard movement, although I do identify with the word itself. Nor do I see myself part of what many have wanted to call the post-vanguard movement, because such as it is, it’s not adding anything new to what was done in the previous period. Therefore, we could say that I have a free and independent style.

What are some of your favorite ingredients to work with?

I would divide them into two groups: on the one hand, the local ingredients that are part of my DNA, and on the other hand, those that the different cultures offer me and that excite me. Now vegetables, in all their multiple expressions, are unquestionably at the center of my cuisine and are expressed in many different forms.

Describe the most creative dish you ever prepared?

We’ve created snow in the desert, edible snow with flavor, with the texture of freshly fallen snow. We’ve brought a stroll through a Mediterranean forest to the table, and we’ve created a misty atmosphere around it. We’ve lyophilized, roasted, grilled, dehydrated, imitated, injected, candied… Now we’re at Enigma, exploring an untrodden path, committed to forging great trails and exploring new terrain. In addition, in Denia, a season is starting in which our expression and style will take an important turn.

Storytelling, theatrics and art seem to be very important to you – how do you incorporate these themes on the plate and off the plate?

There are times when a certain scenography helps the sensory transmission of the dish and can also amplify what we’re already achieving with the dish. Why not go along with the possibilities of the narrative, with its theatrical aspect and artistic expression. I love exploring those paths. They’re beautiful and culturally marvelous.

How important is having 3 Michelin stars to you and to your restaurant?

It’s the greatest recognition that a chef, his team and his restaurant can receive. The Michelin guide is the “Bible” and the history of the best chefs in the world, and for us, it is exciting to be part of that recognition.

How have technology and science affected your cooking style over the years?

I’m a cook. I’m not a technician or a scientist or a botanist, but we’ve allowed people into our kitchen who love this world through their discipline, and thanks to them, we’ve created dialogues together that have enriched us professionally and personally. We continue to do this, and we ask those who really want to and who feel a passion for it to come and offer us their knowledge and vision.

How do you see the future of Spanish cuisine evolving?

I believe that Spanish cuisine is experiencing its finest moment. Plural, serene and creative. I enjoy Spanish cuisine a lot. What’s more, Spanish chefs feel the need to explore the business world beyond our borders, and that attitude is perhaps what is helping to boost the appreciation of our cuisine.

How did you get involved with Enigma?

Palazzo Versace contacted us to tell us about their unique project, and we could see its importance and greatness. We also view very positively that such an important company would believe in us, to be the first to launch this innovative concept. All this, together with our intention to open restaurants around the world, not only ephemeral ones like Enigma, led us to accept this daunting challenge. We’re very enthused.

What is your vision for Vanguard at Enigma? What impression do you want to leave on the UAE?

I’ve brought everything that I am. My latest moments and my well-traveled paths.

We’ve created something independent. We want to seduce and surprise diners with experiences that they’ve never tried before. We’re approaching them with authenticity. They’re not going to find traditional registers of the cuisine from here or there. It’s new, it’s different, and the people from here appreciate it. I love to see how they’re seduced by the charms of the Enigma that we offer, as they reveal themselves in their mouth.

What are your future plans?

I have a lot. I’m immersed in “Quique Dacosta Restaurante” as the creative epicenter. One of the plans that motivates me the most is opening unique restaurants around the world. Creating motivating experiences alongside my team. Discovering other ways of disseminating cuisine, such as the exhibition “Quique Dacosta. Landscapes Transformed.” which we’ve taken to the MuVIM (Museum of Illustration and Modernity), a precious experience. Returning the knowledge we obtained from books back to the cuisine. We’re also in the middle of a new industrial design project that is very interesting. We’ve recently formed an alliance with Porcelanosa, one of the most important Spanish ceramic and tile companies, specialized in kitchen and bathroom furnishings. We’ve become their image, and we’re designing professional kitchens for the home. It’s terrific. 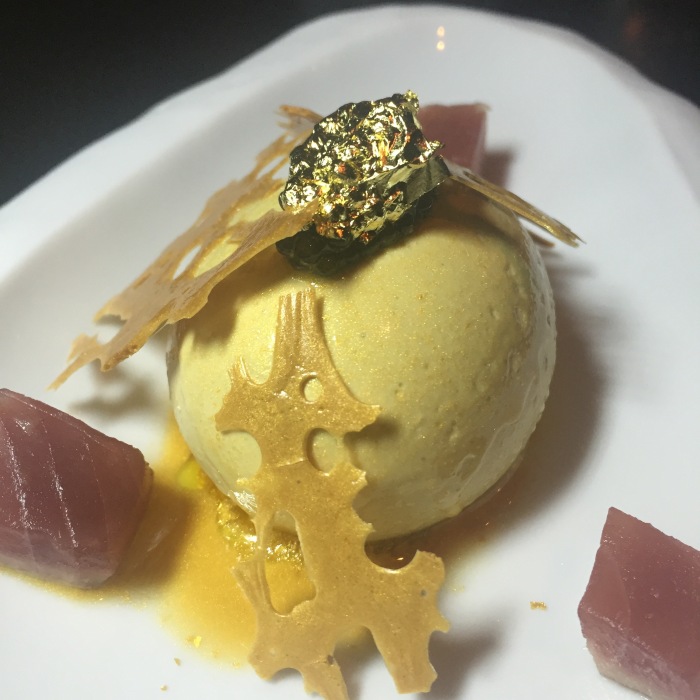 Disclaimer: I was a guest at Enigma however all opinions expressed here are my own

Posted on January 31, 2016 by MemoirsOfATasteBud in Restaurant Reviews