I was whisked away for a staycation a couple of weeks ago in Abu Dhabi, a wonderful reason to explore the capitals culinary scene, a scene I admittedly do not know enough about. With several restaurants on my Abu Dhabi list, I decided to make a reservation at Abu Dhabi’s latest and greatest Pearl’s by Michael Caines. The two Michelin Star chef joins an army of British celebrity chefs to open their inaugural international outpost in the country, aspiring to revolutionize the local food scene. One trip to the Formula 1 last year and one follow up visit to cook for UAE royalty sealed Caines fate as a Abu Dhabi restaurateur, fast forward one year, Pearl’s by Michael Caines was born.

The saucer-shaped restaurant floats quietly atop the Arabian Gulf in the shadows of the great Jumeirah at Etihad Towers and illuminates in fluorescent blue. Pearl’s suffers from a bit of an identity crisis as its positioning is casual however neither the décor, price point nor the menu were casual. The interiors are draped in crystal chandeliers, hardwood floors, iridescent mosaic walls and mint leather furniture. The space is only made casual by a quaint al fresco terrace and the stark white lounge upstairs. With only a handful of tables booked on a Friday night, we had our pick and retreated to the terrace, subject to reverberating beats from the lounge above. The menu was laden with inspiring ingredients like hazelnut mayonnaise and orange and anise-spiced jus, I quickly settled on the 6-course degustation menu, in an effort to get acquainted with Mr. Caines style and cookery.

Service was friendly and sociable, I eagerly sipped on a Raspberry Bellini to whet my appetite as the Warm Lobster Salad arrived. The two tiny nuggets of lobster were juicy and the subtle scent of cardamom and mango were ones to appreciate however I was overwhelmed by the curried mayonnaise, reminiscent of coronation chicken, a sentiment I’m positive was unintentional. The meal was looking up with the arrival of the Pan Fried Foie Gras, seared beautifully in a bed of orange braised chicory, caramelized walnuts, marinated raises, orange and anise spiced jus, a flavorful and sophisticated interpretation of the delicacy. 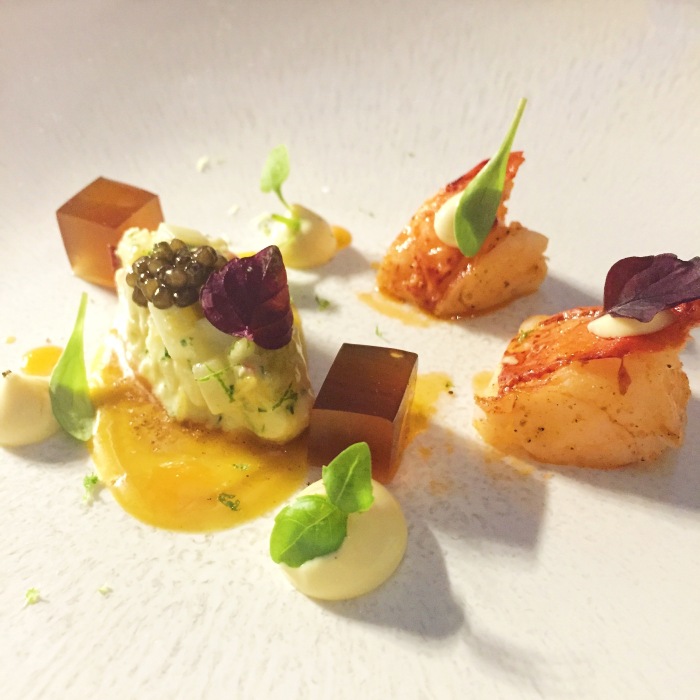 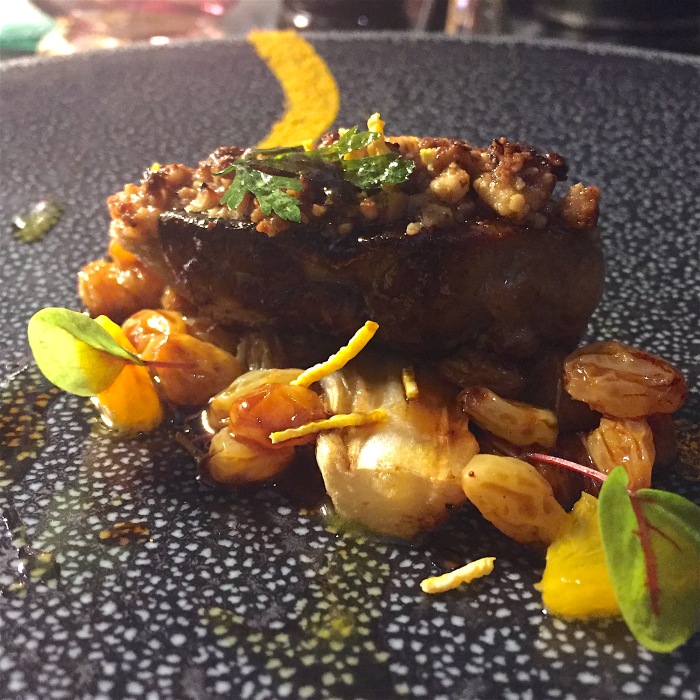 The Pan Fried Red Mullet also received a nod of approval, the skin was crispy, flavors of fennel were prominent with a spicy kick from the Thai puree. I loved the playful approach to plating, namely the with futuristic technique of morphing sauces into cubes of jelly, a signature move across the tasting menu. The Beef Fillet was the final of the a savory plates, the fillet was served alongside braised beef cheek but was overpowered by the horseradish and shallot confit which lay beneath and left me neither impressed nor disappointed, the general sentiment of the evening. That is, up until dessert.

Dessert prevailed as Pearl’s by Michael Caines strong suit, the first dish to meet it demise was the Apple Mousse. The mousse was a fluffy, sweet, mildly bitter and creamy with bursts of green apple jelly, sorbet and vanilla foam and certainly lifted my position on Pearl’s. The most impressive dish of the evening, a Michael Caines signature, was the Chocolate Orange Confit Mousse. The decadent chocolate mousse arrived disguised as an orange and was served alongside orange sorbet. The vibrant sphere collapsed with a pierce of the delicate exterior and struck just the right balance between bitter orange and sweet chocolate, a poetic finale.

At AED 450 per person for the tasting menu, value for money is on point among competitive celebrity chef establishments. And although this meal didn’t have me ‘sick with longing’ as Bradley Cooper’s alter ego in Burnt puts it, I found Pearl’s intentions innovative and progressive. Pearl’s would certainly benefit from the permanent presence of Mr. Cains however I look forward to a follow up visit to see how the restaurants ambiance evolves as well as the menu. 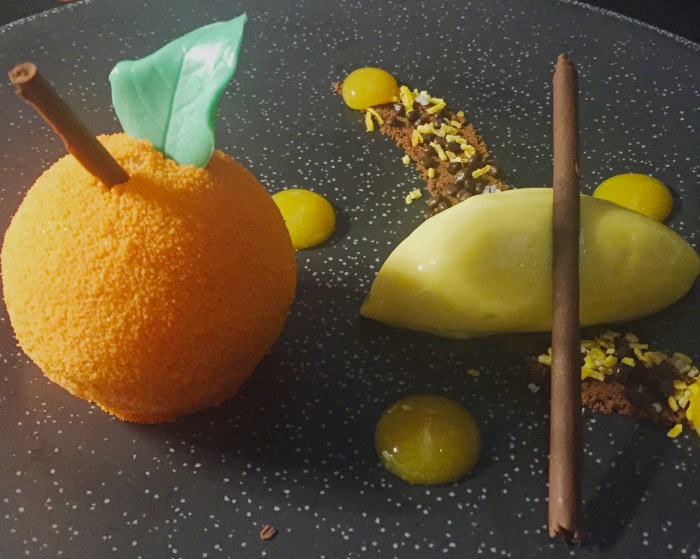 Disclaimer: I was a guest at Pearl’s by Michael Caines however all opinions expressed here are solely my own, as always.

Posted on November 22, 2015 by MemoirsOfATasteBud in Restaurant Reviews