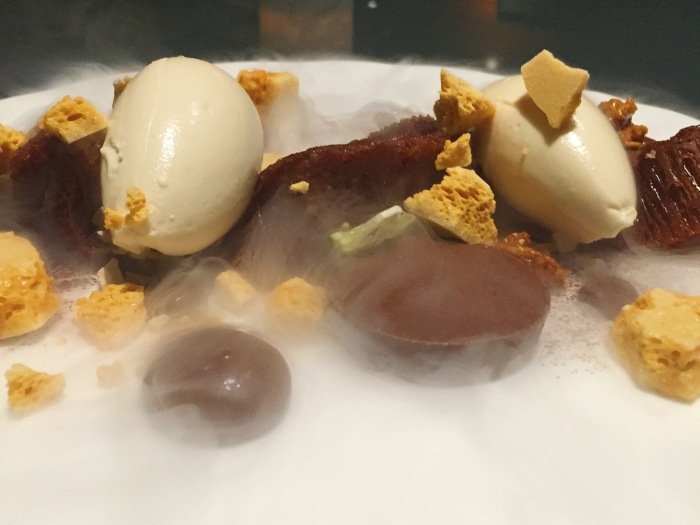 #1 restaurant on TripAdvisor is an alluring title and it is precisely the reason I decided to dine at Zengo. And although the Asian-Latin American fusion establishment has slipped to #3 on TripAdvisor, I am now able to understand how Zengo climbed to the top of that coveted list to begin with. I can summarize my experience at Zengo in one word, saucy, both literally and figuratively. The restaurant is just as sultry, sexy and sleek as the menu, not to mention the vibrant variety of sauce draped over our meal. Chef Richard Sandoval, behind Pan-Latin neighborhood favorite Toro Toro, hails from the West and Chef Akmal Anuar, behind Singapore’s notorious Iggy’s, hails from the East and teamed up for a fusion menu unlike any other I’ve seen in the UAE. The menu combines perhaps my all time favorite flavor profile boasting prominent hints of Japanese and Peruvian cuisine.

With four US locations, Zengo decided to inch closer to its Asian roots with the first international franchise here in Dubai just over a year ago. The interiors speak volumes of about the concept, a blur between the orient and the future, much like the menu. A long bar and spacious dining room dressed in revirberating burnished wood were revealed once we emerged from the floating staircase. We were met by The Old Godfather, a signature cocktail, and a stash of kanchamputi peanuts resting in a crinkled Japanese newspaper in the lounge.  A Robata Grill and asymmetrical ceiling panels led us to our table, a leather-bound dimly lit circular nook, where talk of ceviche, satay and sushi ensued. 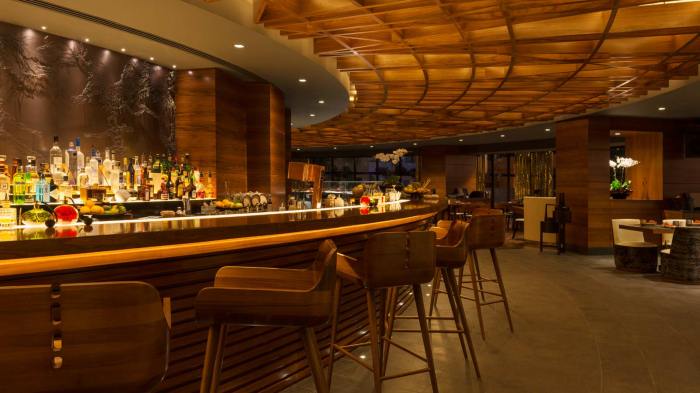 Our amuse bouche came in a Chinese soup spoon with liquified spheres in tones of mint and ivory, one heaping bite revealed a burst of mojito and Chef Akmal’s innovative cooking methods. The Hokkaido Scallops Ceviche, our first cold plate, arrived resting in the mangled seashell of its origins and was dressed in refreshing yuzu jelly for the standard ceviche-citrus contrast and garnished in avruga caviar and junsai. An army of Angry Zengo, popular among TripAdvisor enthusiasts, followed hugging tuna tartare in a chili oil, wasabi mayonnaise and mango salsa, a spirited maki roll and a nice upgrade for the local sushi scene. 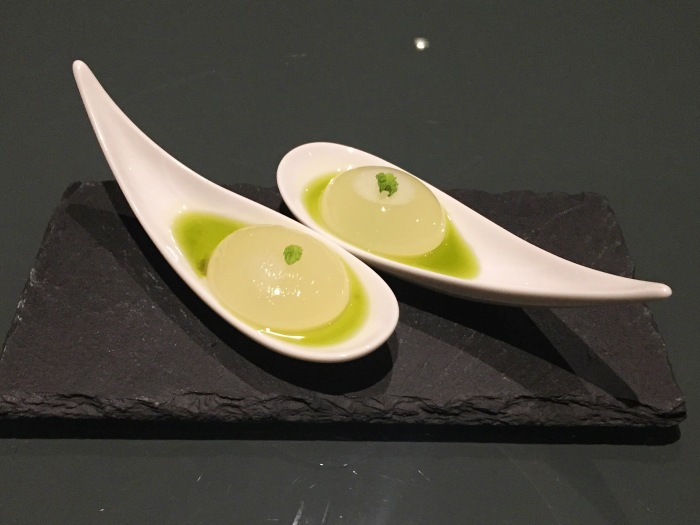 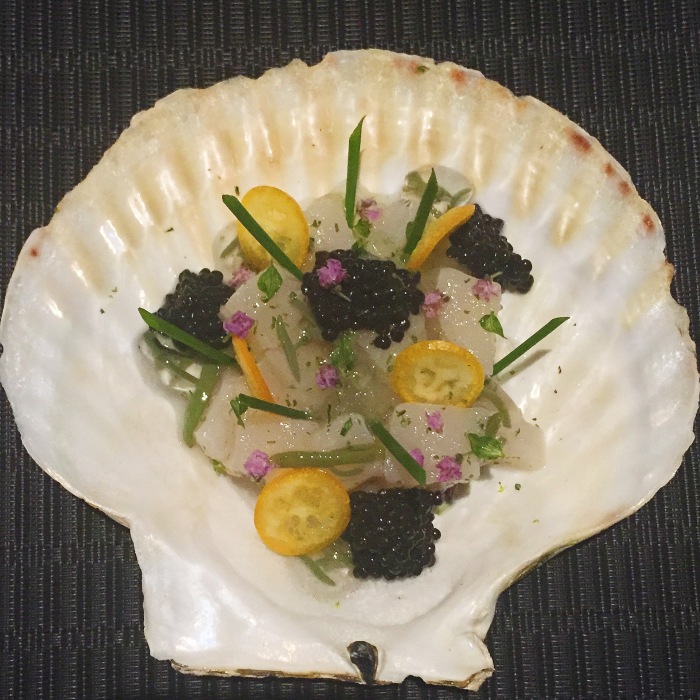 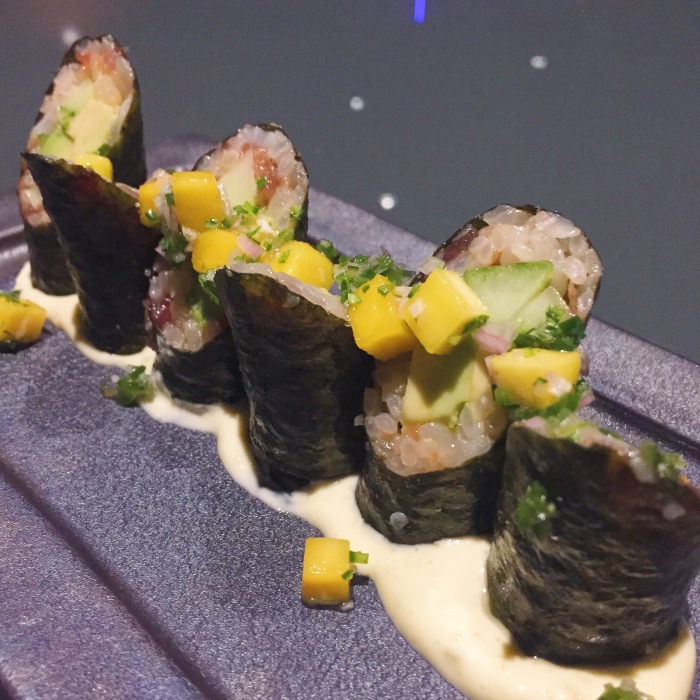 The warms dishes to follow, although much less visually appealing, put their predecessors to shame. The Duck Maseca Pancake came highly recommended and regardless that it resembled a pancake doused in a grid of Velveeta cheese with Rice Krispies on top, it was in fact a taste bud triumph.  The pancake was woven with duck leg confit, a subtle integration, enhanced by chipotle barbecue sauce and adorned with crispy rice crackers and perfumed cilantro, a savory pancake worth returning for. My husband eagerly ordered the Octopus paired with sweet potato, chipotle and jalepeno, an unusual yet intriguing combination. 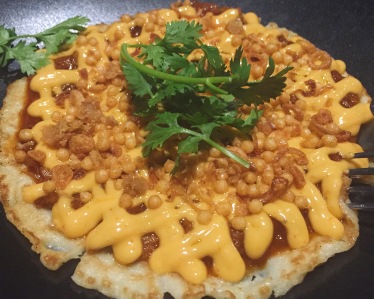 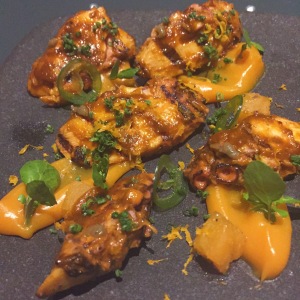 The Patagonian Toothfish left much to the imagination as it hid beneath a mound of watercress. One bite of the poetic grilled chilean seabass radiated with flavors of chili and horseradish cream. The unexpected favorite gave light to how Zengo emerged as the #3 restaurant in Dubai against 5,681 contenders. The Livingstone Wagyu was charred with immense flavor and paired beautifully with garlic grilled Jerusalem artichokes. 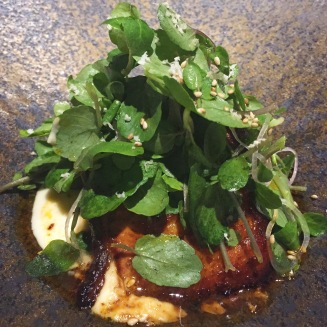 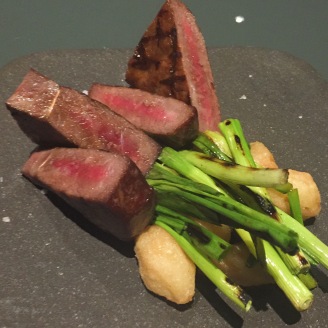 Sweet tooth set in quickly and Chef Akmal’s came over to personally recommend his signature, the Pralus Bio Equateur, a molecular gastronomic charade and a rollercoaster of tastes and textures. The frosty liquid nitrogen-blasted honeycomb cake dissolves in your mouth and was paired with of dark chocolate pudding, peanut plantane and honey ice cream and left us in awe of the eccentric menu. 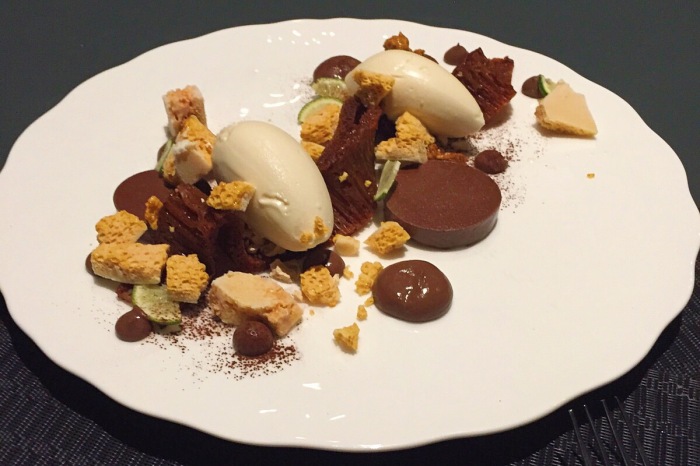 Zengo infuses exotic and unexpected flavors into some of the world’s most common dishes, converting them into symphonies of flavor. Chef Akmal most certainly doesn’t play it safe and isn’t afraid to let his imagination run wild which has translated beautifully in Zengo’s case, I found it difficult to believe that the restaurant wasn’t even near capacity. If you are a meat and potatoes kind of person then Zengo isn’t for you, but if you appreciate fusion of bold flavors then you’ll want to make your way over to the Le Royal Meridien.

Disclaimer: I was a guest at Zengo, however as always, all opinions here are my own.

Posted on September 17, 2015 by MemoirsOfATasteBud in Restaurant Reviews

💭Let’s Chaat (see what I did there 🙆🏻‍♀️)💭 We all know Instagram engagement is sh**, I’ve been losing followers for the last year and I don’t think most of you will even read this. Honestly I can’t be bothered by the algorithm but am wondering, what type of content do you prefer to see (for those of you still here) food or family? 👧🏻👶🏻🍴
💙 4 MONTHS 💙 Four months with my little chunky monkey 🐵 The most mellow, curious little boy who admires his sister so much despite the volume of smothering bestowed upon him by her 👧🏻👶🏻
2020 is off to an interesting start to say the least 🌏🔥☔️💣😷👩🏻‍💻Trying to remember to breathe & enjoy the little things ☕️And the big things of course 👨‍👩‍👧‍👦
Cheat days are best days 🍝 Bookmark this if you are craving carbs, this Truffle Brown Butter Gnocchi is flippin excellent 😛#cheatday #sorrynotsorry #worthit
And just like that, the holidays are over, my maternity leave is over and back to the (part-time for now) hustle, wish us luck 😳🥱I miss his face already, If you need me I’ll be under my desk crying 🥺And don’t judge if I have spit up stains all over my clothes 🤣 #momlife
Happy New Year from my little tribe to yours 🎊 What a year & decade it’s been, in a blink I moved across the globe, got married and had 2 kids 👧🏻👶🏻Looking forward to 2020 and the decade to come (hopefully the decade of sleeping in and self care #wishfulthinking 🤷🏻‍♀️) 🎊#happynewyear #2020 #3yearsold #3monthsold
Follow Memoirs of a Taste Bud on WordPress.com
%d bloggers like this:
%d bloggers like this: