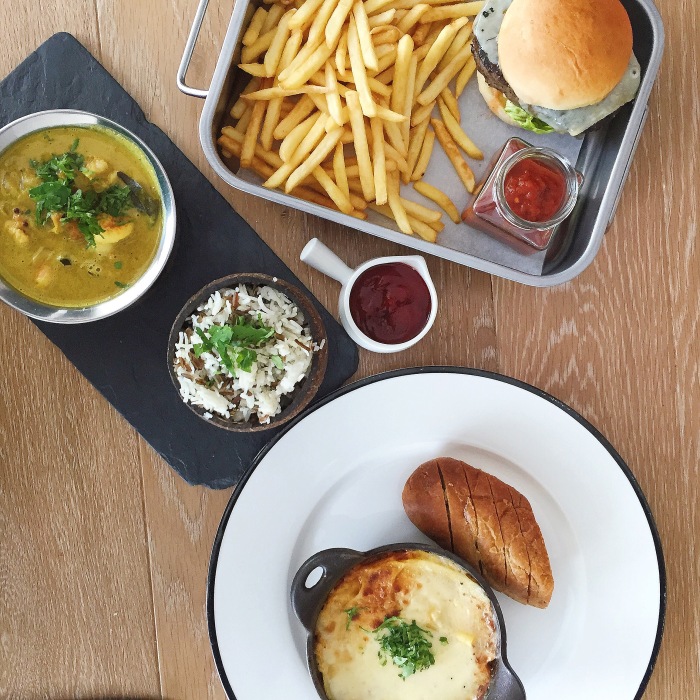 You’ve probably all heard of The Dinner Club by No. 57 by now, the not-so-secret supper club has evolved into one of Dubai’s most coveted dinner invitations. Hosted in obscure locations like empty swimming pools and abandoned buses, the dinner club has earned endorsements by many a luxury brand including an appearance by Mr. Christian Louboutin himself. Partners Alamira Noor Bani Hashim and Buthaina Al Mazrui deserve a round of applause for their avant garde collaboration. Their most recent venture, No. Fifty Seven Boutique Cafe, pays homage to the duos aesthetic and gastronomic potential giving us common folk a chance to experience the No. 57 brand.

The cafe’s location is only slightly less obscure than the dinner club locations, situated in Abu Dhabi’s underbelly between a construction site and the Arabian Gulf. You’ll weave past several cranes and tractors before arriving to the gorgeous Al Bateen Wharf development where a hand full of symmetrical glass buildings sit facing the open waters. Sunlight floods the chic cafe and the monochrome color palate sits elegantly against marble tiles. Large mirrors and a glass facade strategically enlarge the space. 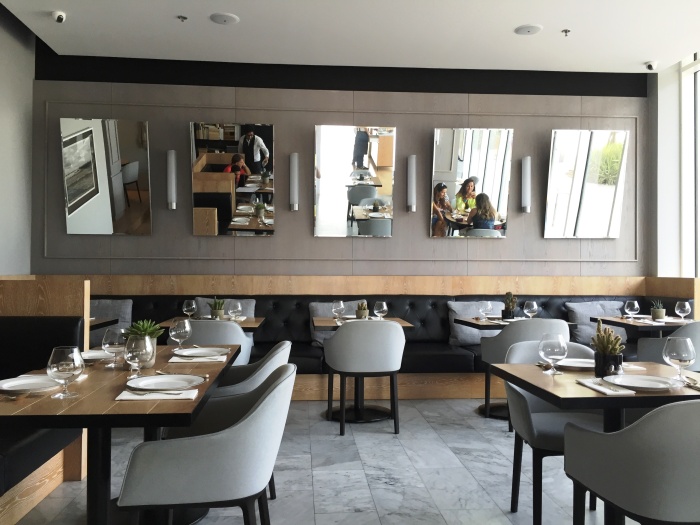 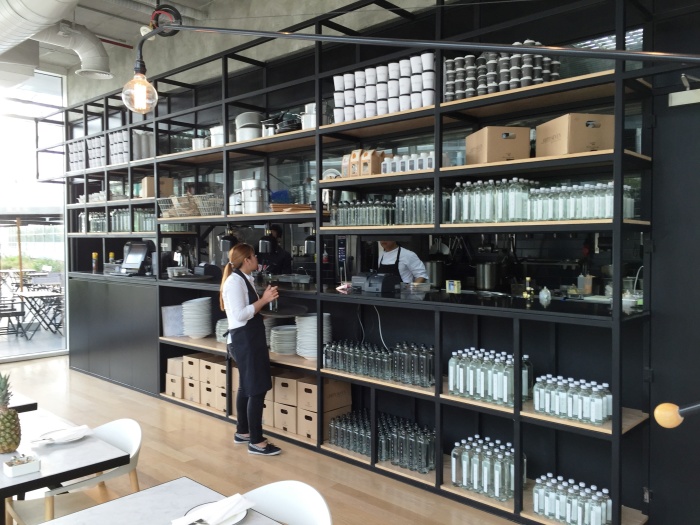 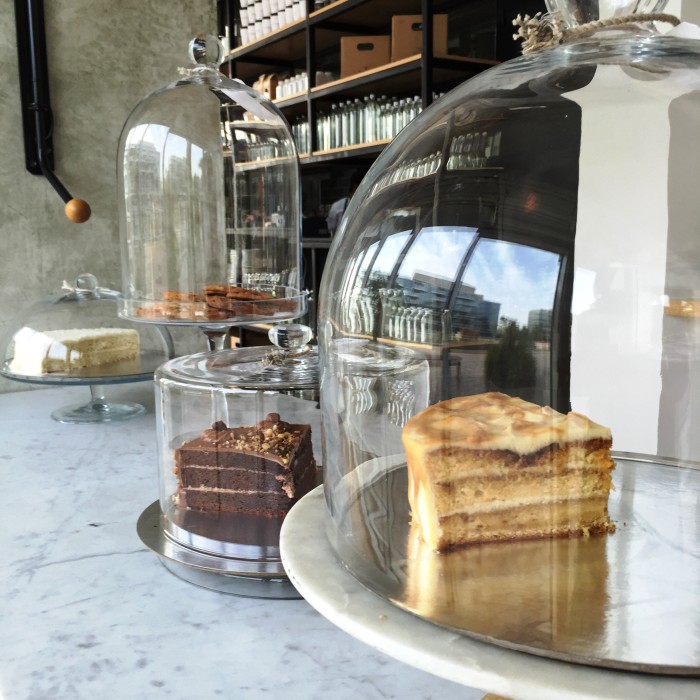 The ambiance was serene when we arrived on a Saturday afternoon with only a handful of patrons clinking away with their vintage silverware. The homegrown team put a sophisticated touch on otherwise regular cafe fare boasting menu items such as Truffled Eggs, Chicken Liver Parfait and Lobster Linguine. Rather famished we quickly ordered the Malabar Prawn Curry and Beef & Butternut Squash Lasagna, a combination which peaked my curiosity.

The Keralan-style curry served with wild rice was wild indeed. The stew was overrun with chunks of tomato and onion alongside a generous portion of prawns providing succulent meat in every bite. Immersed in a stew of overwhelmingly coconut and coriander flavors, this entree satiated my love of the east. My husband wasn’t as amused by the concoction giving it a mere mediocre review, he’ll never understand my relationship with coconut curries. 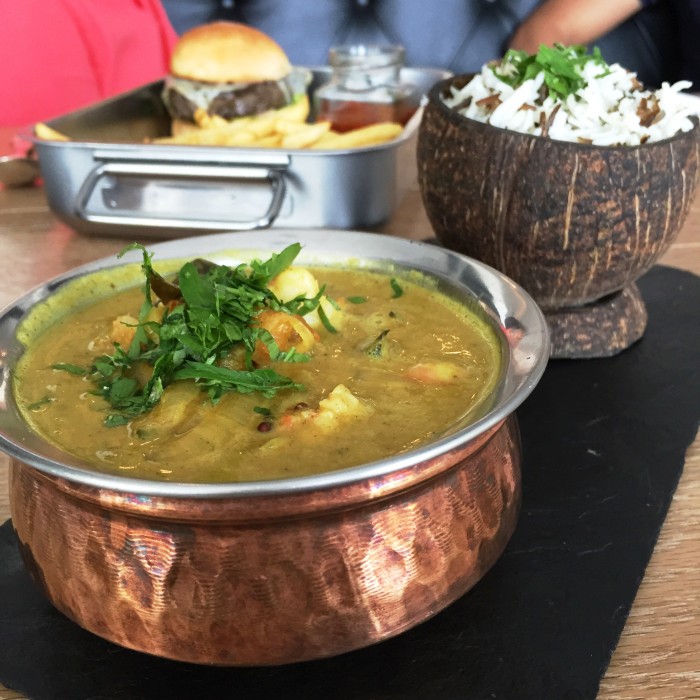 The lasagna was such a simple take on the Italian staple. The piping hot pasta dish arrived in a cast iron skillet encased in melted cheese similar to that of French Onion Soup, what lay beneath was an unusual surprise. The aroma was nostalgic reminding me of snowy Chicago winters where priorities were centered around sitcoms and pasta dinners from the family-run trattoria down the street. A quick pierce of the cheesy exterior revealed a dense layer of butternut squash among beef and sheets of lasagna. No. 57 has officially raised the lasagna-bar.

My colleague gave their Cheeseburger with Tomato Chili Jam a thumbs up from across the table as the beef patty consumed him. 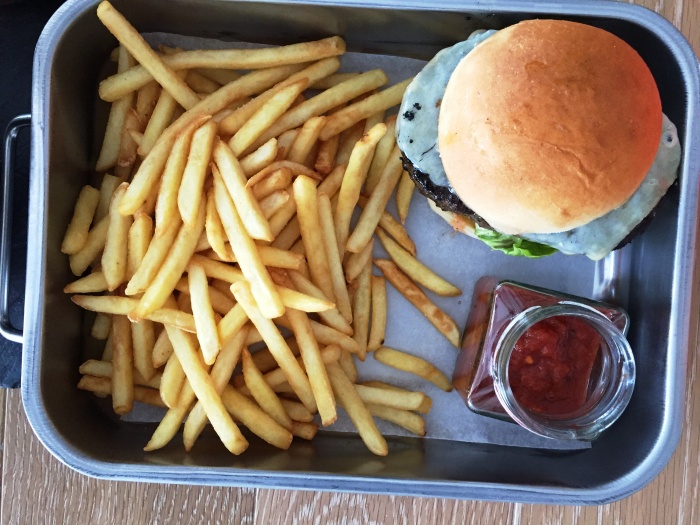 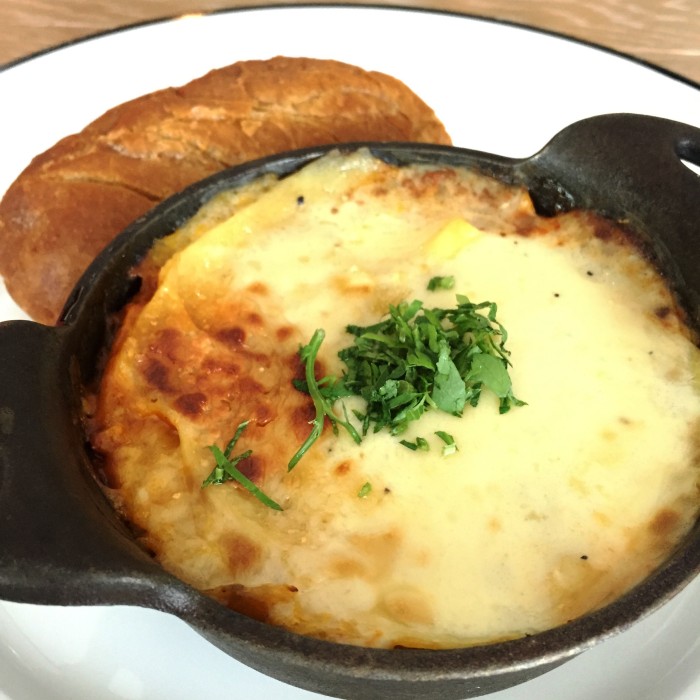 A friendly chat with the cafe manager and we fell victim to No. 57’s dessert menu. One signature Ermahgerd and one Toffee Skillet Cookie were in order. The ‘Ermahgerd’, a name inspired by the ‘omigod’ moan that typically accompanies the desserts demise, was anticlimactic despite its beautiful presentation in an apothecary glass dome. The toffee crumble, cream and roasted marshmallow combination left me with what I can only describe as a peculiar aftertaste, I think it was the cream that disagreed with my palate. The Toffee Skillet Cookie on the other hand was just as glorious as it sounds. It was like a porridge of half baked chocolate chip cookie, toffee syrup and vanilla ice cream or as my colleague refers to it as simply ‘cookie soup’, worth the drive to Abu Dhabi. 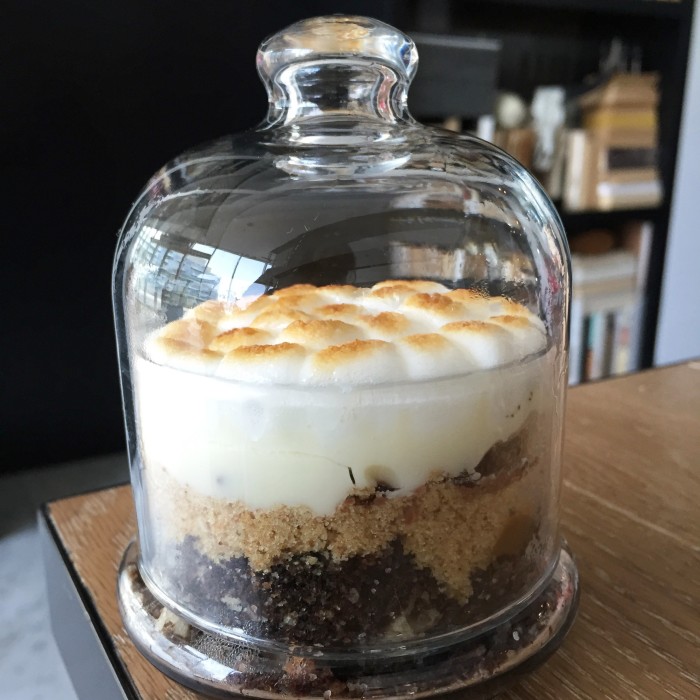 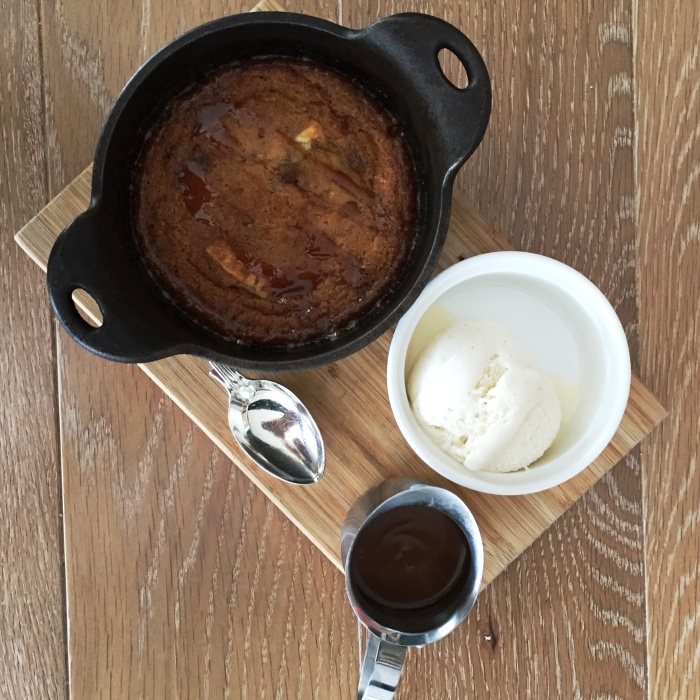 Being the cynic I am I was tempted to write off No. 57 as overrated, probably because of the invite-only stigma associated with their dinner club. Not to mention the amount of hype which preceded the cafe opening late last year was cause alone for skepticism. And while I didn’t utter any highly anticipated ‘omigods’ during our meal, the truth is my taste buds and I very much enjoyed our excursion to the capital. The concept cafe qualifies as one of the better homegrown brands I’ve seen in my two years in the UAE. I foresee many road trips and a lot cookie soup in my future.

Posted on June 3, 2015 by MemoirsOfATasteBud in Restaurant Reviews

2 thoughts on “No Invitation Necessary at No. Fifty Seven Boutique Cafe”