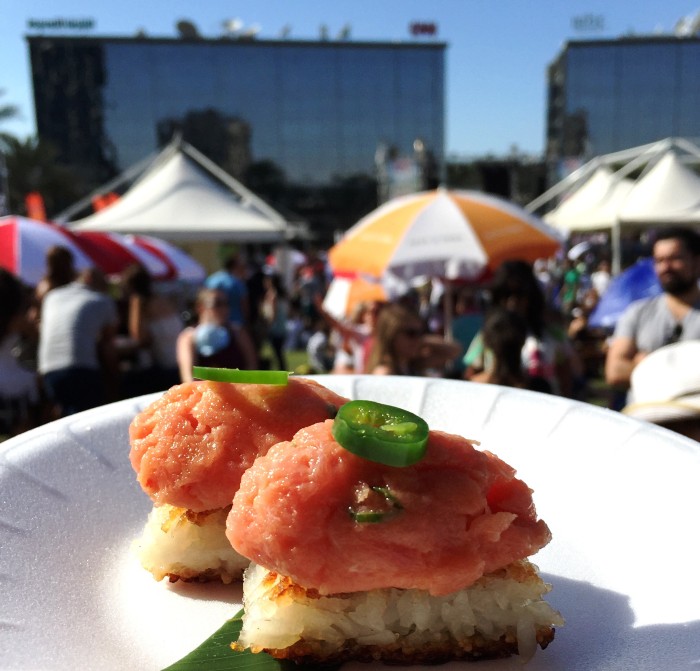 After debating for days, seeking numerous opinions and listening to mixed reviews, I caved and visited the Taste of Dubai. Having lived in Chicago for several years, home to the largest food festival in the world, it was hard for me not to compare the Taste of Chicago to the Taste of Dubai. The Taste of Chicago celebrates its 35th anniversary this summer, welcomes over 3 million visitors per year, is home to over 200 vendors yet admission is FREE. Needless to say I had to bite my tongue when it came time to pay 90 AED ($25) per person for admission to a food festival in its 8th year with only 20 participating restaurants. Sigh. So as you can see, it was with cynicism that I began my adventure at Taste of Dubai.

It was going to take some good food to redeem me, so on a mission we immediately headed for the row of vendors. Admittedly the range of restaurants were promising, from Burj Al Hammam to Grammercy and The Act to Tresind. Mixed aromas drifted throughout the park and left us confused where to start. We opted for Gaucho to begin, we ordered the Sirloin Steak and the Chorizo. The steak was complex and flavorful however a few of the pieces were too rare for my taste, the potato alongside was subtlety infused with truffle which complimented the meat perfectly. The Chorizo was bold and spicy and was paired well with roasted red peppers.

The day was starting to look up as we continued down restaurant row to Katsuya which I’ve been meaning to try. We opted for a small bite and ordered the Crispy Rice over Spicy Tuna Sushi. I reached for soy sauce when the vendor told me that there was no need as the rice was already brushed with soy sauce, a good tip indeed. I took his advice and ate the sushi sans soy sauce and it was probably the single best dish I tried all day. A slice of jalepeno gave the sushi the perfect zing alongside the refreshing tuna resting over a salty and crispy mound of rice.

Moving along, we tried the Wasabi Prawns with Mango Salsa from Noodle House which are usually fantastic, but the batter was cold, soggy and the ratio of wasabi to prawn was overwhelming. The Korean BBQ lured us in after that, we had Galbi (beef) from Sonamu which was fatty as always but chargrilled and delicious. The Bibimbap is usually a favorite but didn’t measure up, the spicy sauce was its saving grace giving it some flavor. I rounded out the afternoon sampling a Camel Burger from Aseelah, which surprisingly tasted like beef, before giving my taste buds a break for a couple hours. 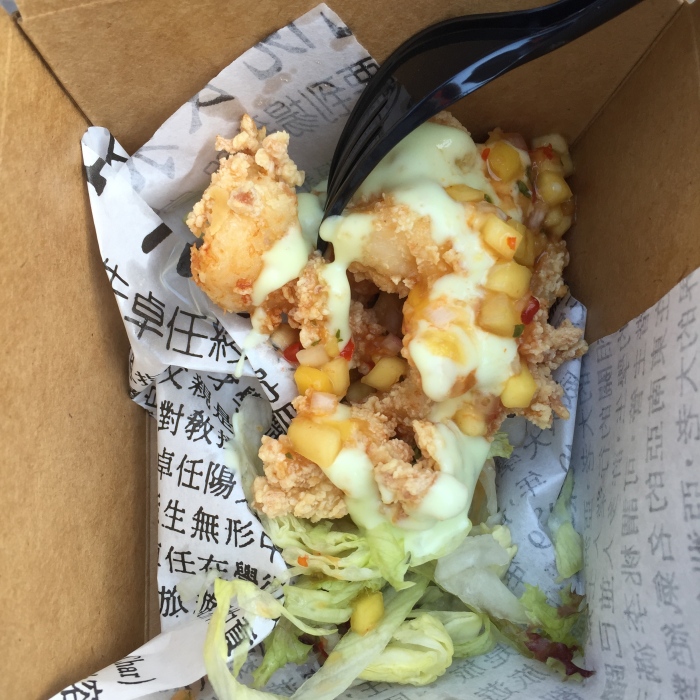 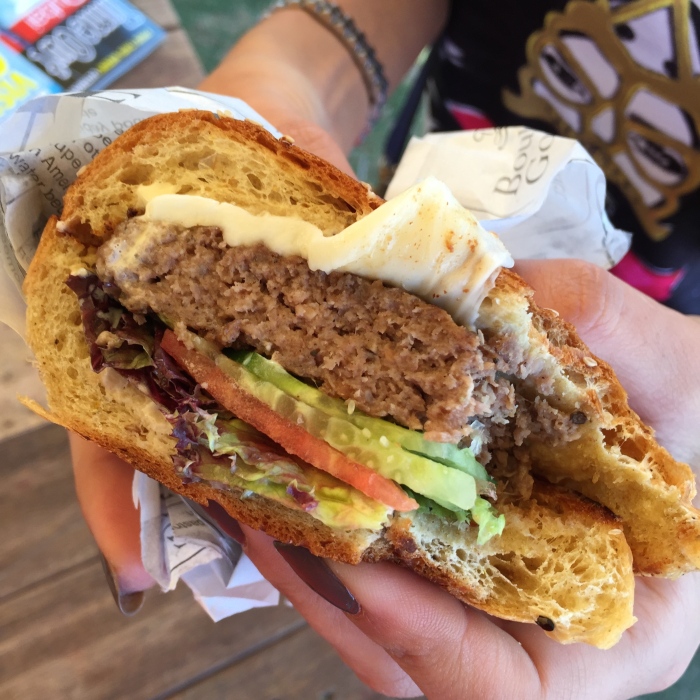 With a full stomach, the cynicism began to fade, we planted ourselves at a picnic table with good friends and enjoyed some live music as the sun set over Media City. A wave of enthusiasm came over me after sitting through a demonstration by one of my all-time favorite street food guru’s Chef Andy Bates. I’ll probably never attempt to replicate his cut of steak alongside salsa verde and white bean mash but was completely captivated by him. 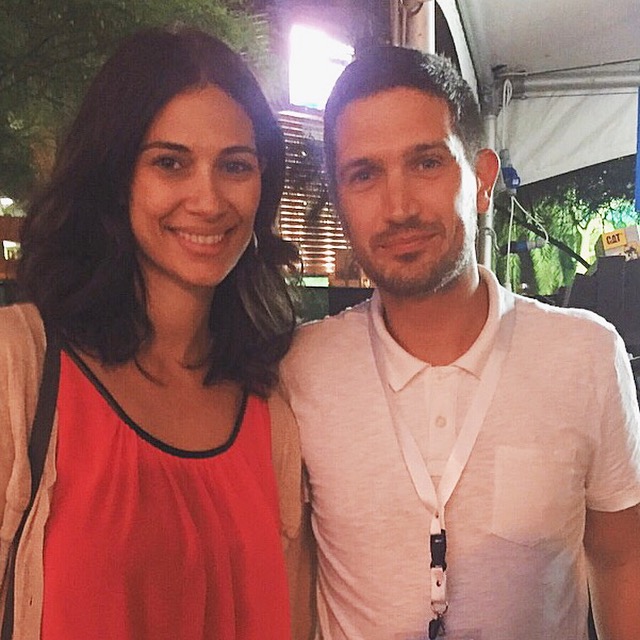 Shortly after that, a few friends and I ambitiously signed up for a cooking class with Michelin Star French Chef Jean Christophe Novelli. With his cookbook at stake, we attempted to get a head start on our recipe as the chef elegantly gave us instructions. We piled pomegranate, garlic, onions, parsley, olive oil, tomatoes and various spices with white fish into foil and popped it into a pot with water to cook. It was an experience to remember even though our fish was still raw when the timer went off and we failed the competition miserably. 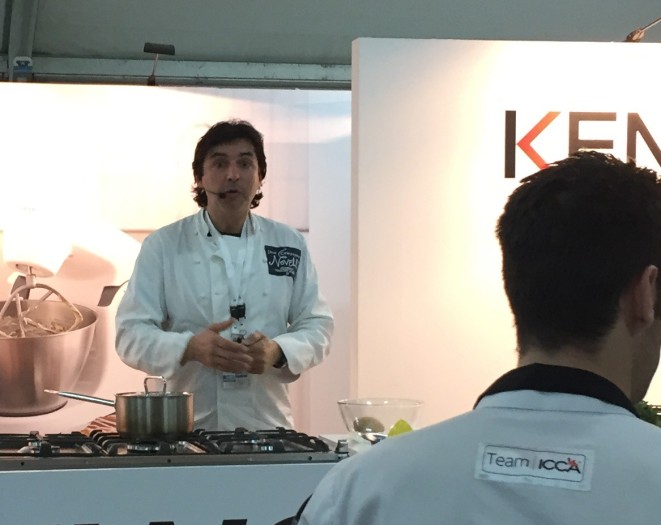 We ended the day on a high note sampling some sweets, a Salted Caramel Chocolate Mouse from Savarin was the highlight. The Holland House Mini Pancakes with Nutella were just as good as the hype that precedes them and bite of delicate cheesecake from Magnolia Bakery which is always a sure thing!

A few things to keep in mind for next years visit to Taste of Dubai:

My wallet is lighter today and my jeans a little tighter but I can sleep well knowing that I tried 5 new restaurants, met Chef Andy Bates and took a Michelin star-worthy cooking class. The Taste of Dubai does have something to offer and although I can’t completely shake the cynicism, it has subdued for now. It is great to see Dubai embracing its vibrant culinary scene but could stand to learn a few things from our friends across the pond at the Taste of Chicago.

Posted on March 14, 2015 by MemoirsOfATasteBud in Restaurant Reviews

3 thoughts on “A Cynics Take on the Taste of Dubai”