The highlight of any corporate job is that sacred hour bestowed upon us by the food gods where we relentlessly eat our way into a food coma, also known as lunchtime. For the most part my colleagues are adventurous foodies, with the exception of the token person or two requesting Lebanese food every other day. A few weeks ago we ventured over to Shogun, a Korean, Thai and Japanese restaurant, which set up shop in old Dubai several years ago and recently opened a second location in Media City.

We made the 2 block trek to Shogun and made our way upstairs to a table with a built-in BBQ grill. The two story establishment felt somewhat commercial and understated and was packed with far east natives, a reassuring indication of authentic food. There is a small sushi bar downstairs alongside several booths and private dining rooms upstairs alongside DIY BBQ tables. Each of the three menus were extensive and intimidating so I left the ordering to my colleagues, they skimmed through the bento boxes, sushi boats and Thai curries before settling on Korean cuisine.

Before our main dishes were ready we were presented nine varieties of Kimchi. The side dishes were spicy and sour with high potency of vinegar and salt. The main ingredients are cabbage, scallion, zucchini, bean sprouts and egg served in a variety of ways including fried, grilled and raw. I found many of the sides too sour to eat alone but provided a nice garnish to the BBQ beef we grilled later.

The waiter came around to fire up our grill and delivered the raw beef, we opted for the traditional “galbi” beef short ribs which were marinated in sweet Korean soy sauce. We unraveled the raw beef and spread them across the grill adding in a few onions and cloves of garlic for flavor. After a few minutes we were inundated with the smokey BBQ aroma, we flipped the beef once and used a scissors to cut the strips into small pieces as we impatiently awaited the finished product. The beef was incredibly delicious and succulent boasting both sweet and salty flavors, my favorite combination. The ribs are quite fatty, just embrace the fat – its part of the experience. The BBQ is served with rice however since I was already well on my way to a food coma I opted to pair the beef with lettuce and a variety of spicy and sweet pastes. 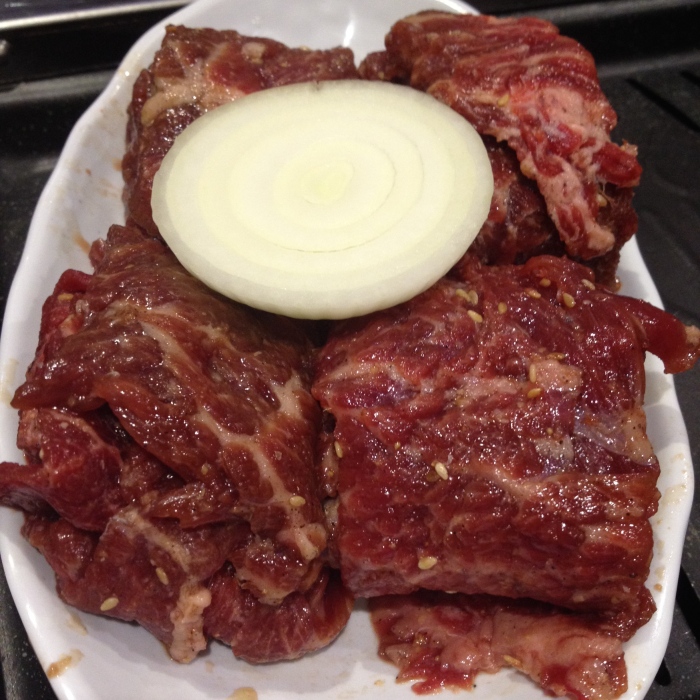 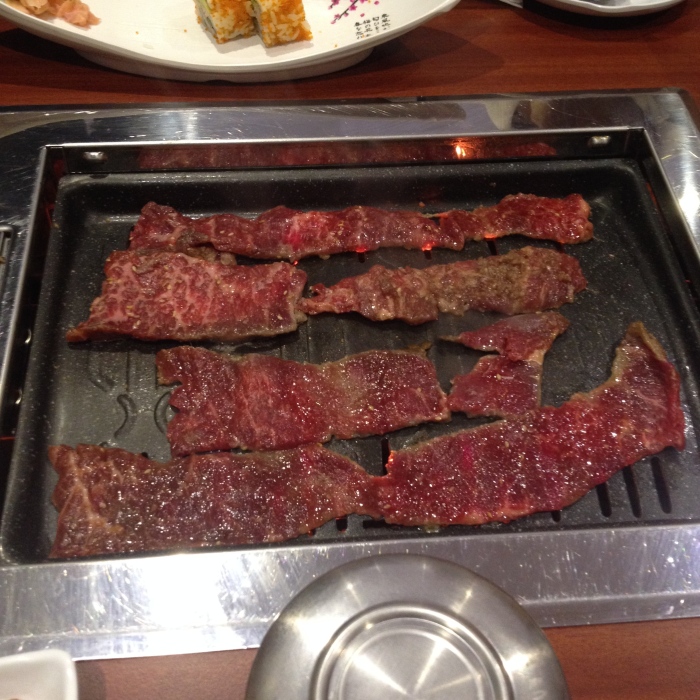 And finally, the flavors of Korea’s signature dish Bibimbap (pictured above), which literally means “mixed rice”, rivaled the BBQ. The picturesque meal is served in a large pot and, as the name suggests, is composed of rice alongside various sautéed vegetables all topped with an egg yolk and beef. Gochujang (chili pepper paste) and doenjang (salty soybean paste) are stirred into the rice dish and gave the meal a flavorful and salty kick, an unexpected surprise.

You can opt for the BBQ to arrive pre-cooked but the fun is in preparing the meal yourself. Be warned, the BBQ smell will linger so don’t schedule any important meetings that afternoon. It’s not your typical lunch break, but my taste buds and I appreciated the much needed delicious DIY excursion far far away from my laptop and conference rooms, yours will too!

Posted on December 30, 2014 by MemoirsOfATasteBud in Restaurant Reviews

💭Let’s Chaat (see what I did there 🙆🏻‍♀️)💭 We all know Instagram engagement is sh**, I’ve been losing followers for the last year and I don’t think most of you will even read this. Honestly I can’t be bothered by the algorithm but am wondering, what type of content do you prefer to see (for those of you still here) food or family? 👧🏻👶🏻🍴
💙 4 MONTHS 💙 Four months with my little chunky monkey 🐵 The most mellow, curious little boy who admires his sister so much despite the volume of smothering bestowed upon him by her 👧🏻👶🏻
2020 is off to an interesting start to say the least 🌏🔥☔️💣😷👩🏻‍💻Trying to remember to breathe & enjoy the little things ☕️And the big things of course 👨‍👩‍👧‍👦
Cheat days are best days 🍝 Bookmark this if you are craving carbs, this Truffle Brown Butter Gnocchi is flippin excellent 😛#cheatday #sorrynotsorry #worthit
And just like that, the holidays are over, my maternity leave is over and back to the (part-time for now) hustle, wish us luck 😳🥱I miss his face already, If you need me I’ll be under my desk crying 🥺And don’t judge if I have spit up stains all over my clothes 🤣 #momlife
Happy New Year from my little tribe to yours 🎊 What a year & decade it’s been, in a blink I moved across the globe, got married and had 2 kids 👧🏻👶🏻Looking forward to 2020 and the decade to come (hopefully the decade of sleeping in and self care #wishfulthinking 🤷🏻‍♀️) 🎊#happynewyear #2020 #3yearsold #3monthsold
Follow Memoirs of a Taste Bud on WordPress.com
%d bloggers like this:
%d bloggers like this: