When I think of dining at a mall, I envision oversized chain restaurants like TGI Friday’s or PF Chang’s and crowded luxury cafes like Laduree or Armani Cafe at Dubai Mall. When I learned about a celebrity chef casual eatery in Mercato Mall I was itching to give it a try. Chef Scott Price and Nick Alvis, both trained by Gordon Ramsey in their early career, took a leap of faith when they opened their first joint venture, Table 9, in Dubai. After several years of critical acclaim the duo teamed up with the holding company behind Spinneys to open up a new chain, Taste Kitchen, arguably one of the most exciting mall eateries in Dubai.

Taste Kitchen, tucked away beneath a huge atrium in Mercato Mall, is a light, airy and sophisticated space. The design is chic and scandinavian-simple with wood, pistachio green and white accents. A sleek bar serves as the only real wall in the restaurant hiding the kitchen. Small plants are situated throughout the space and faux-walls divide Taste Kitchen from the rest of the mall.

The homegrown restaurant boasts a modern European menu with items such as Crab and Green Apple Jars with Toast and Beef Rib, Greens, Ginger and Star Anise, which both peaked my interest. This was not the mall food I was accustomed to. We started by ordering a decanter of water infused with pineapple and coriander and focaccia bread served on a cutting board. The water was refreshing at first sip but the coriander left me with an awkward herb aftertaste, next time I likely opt for the more traditional ginger and lemon decanter.

For my main, I indulged in the Shrimp, Coconut and Garam Masala over a bed of white rice with the gravy served in a separate bowl. I eagerly poured the creamy sauce over the dish, the marriage of the garam masala curry with the shrimp packed a punch. The blend of spices were sweet and spicy however I did find myself wishing there were some vegetables to accompany the glorious curry. 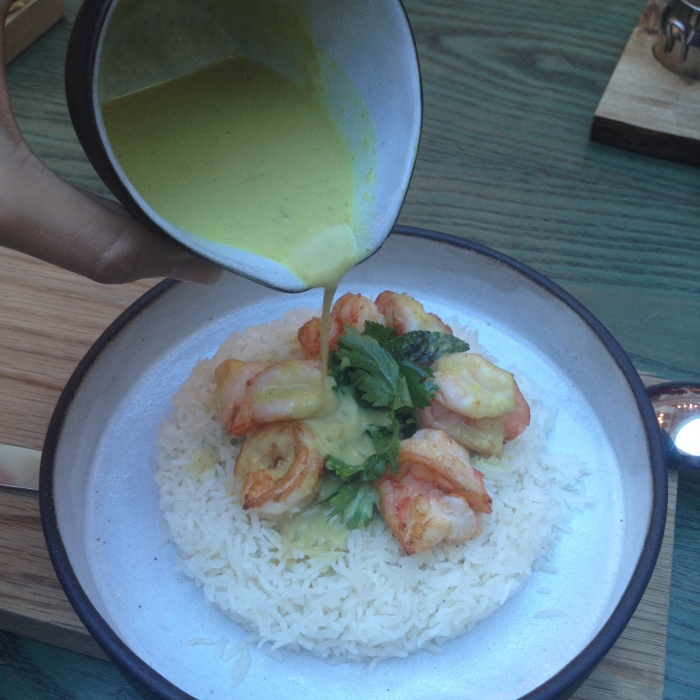 My fellow diners had the Mushroom, Smoked Veal and Oregano pizza which received a shoulder shrug and mediocre review although it was devoured, literally, in a matter or minutes. The Lamb Shin, Bulgur, Red Onion and Pine Nuts was presented beautifully with the Lamb Shin resting beneath a neatly stacked round pilaf of bulgur and seemed to be a hit. We were too full to try the Lemon Meringue Pie, which was recently ranked one of the best desserts in Dubai by Whats On Magazine, so my taste buds eagerly await a follow up visit. 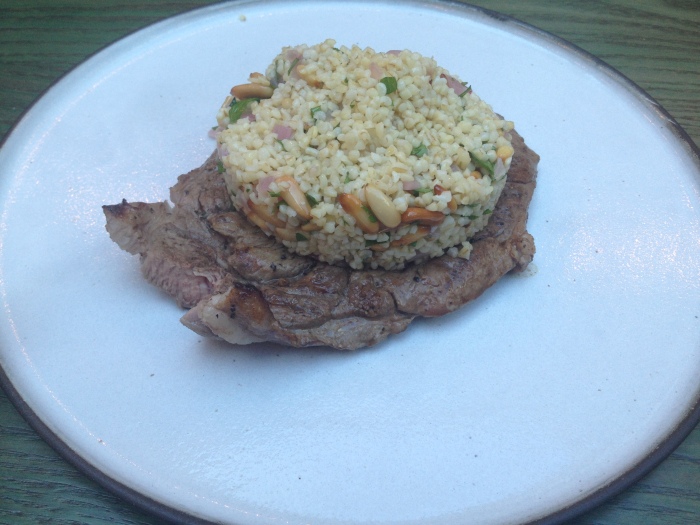 The restaurant which calls themselves ‘fuss-free’ is on point, the menu is effortlessly creative and simple at the same time. The space feels like a modern kitchen nestled in a greenhouse, a much welcomed escape from any mall. The celebrity Chef duo may have swapped gourmet for casual chic but I have a feeling they won’t be out of the limelight any time soon.

Posted on December 21, 2014 by MemoirsOfATasteBud in Restaurant Reviews